Home>Posts>Tech Explained>What are Edge Servers and How are They Used?

What are Edge Servers and How are They Used?

What are edge servers?

Edge servers are powerful computers put at the network edge where data computation needs to happen. They are physically close to the systems or applications that are creating the data being stored on, or used by, the server.

So what is an edge server, exactly? In the video below, we provide an in-depth explanation of edge servers and the technologies they power. Click here to explore OnLogic’s line of edge servers.

Edge servers live on the “edge”

The traditional server is a computer that acts as a central source of information to distribute resources across the network. When people hear the word server, most think of a cold room in the back of a building or underground in cement bunkers full of endless rows of blinking boxes. But that is the model of 10 years ago, before the proliferation of the cloud and rapid growth of the internet.

Edge servers are the next step in the evolution of server technology. Edge servers are driving advancements in artificial intelligence, machine vision, and deep learning. As a result, a lot of the analytics are now happening further from the traditional data center environment.

An edge server is able to bring server-like computation to the edge. They might be installed in NEMA enclosures, custom cabinetry in the middle of the desert, a closet, warehouse, on a desk, or even right in the middle of a welding studio. All of those locations are where people have problems with data computation; something we’re trying to solve with edge servers.

Why use edge servers?

As technology has evolved, decision making needs to happen quickly. If a decision can’t be made quickly, it may have major consequences, especially with the proliferation of artificial intelligence. For instance, let’s say you have a robotic arm on a manufacturing line. It needs to be able to react quickly because it’s too close to a person for safety reasons, or stop a line because it has identified a problem using its vision capability. The system doesn’t have the time to send data to a large analytic center to make that decision. It needs to stop immediately. OnLogic edge servers are being used by companies developing cobotics (collaborative robotics) solutions to ensure the safety of team members who work in close proximity to robots.

Cloud services and big data have been growing exponentially. There are more nodes and data collectors pushing data up to the cloud than ever before, and people are realizing that pushing unfiltered data to the cloud is expensive. You are in charge of both the cost of storing the data and transmitting it, so you need to store only what you really need and use. Making the computational decisions ahead of time before sending data to the cloud saves you money both on transfer fees as well as cloud storage fees.

Edge analytics is basically trimming fat at the source so that what’s being transmitted is leaner and more efficient. This makes it a more cost-effective way of dealing with your data. Additionally, having extra data held in the cloud isn’t going to help your business. You want to find out what you need quickly; this is where edge servers can help.

A lot of people realize they need this computation right there on the line (right next to a robot, for example), but you can’t exactly roll a rack up to a robot and have it sit there. You need a specially built server to do that. Edge servers get that level of compute into a small, reliable form factor that can handle the robot.

Moving the data center to the edge

What we’re talking about is what was in a massive data center and making that small enough to go into a box or a robot enclosure, like in a small NEMA cabinet, for example. That small server needs connectivity because once all that information gets generated, sorted, and reacted upon, it has to be able to connect up to the cloud, intranet, or other devices to be able to move that data around.

Most of the time data centers are highly cloud-connected, but they also have massive physical storage centers attached to them. So, being able to have that hybrid, have enough storage on-site (even hot-swappable), and be able to pull your data or be able to send it up to the cloud (via Wi-Fi, 4G, or really fast internet) is an important element for edge computing applications.

Those are the problems that our edge servers are solving. We’re providing high connectivity, high compute with some storage capacity, or at least flexible storage capacity, for those kinds of needs, with the right level of processing power. 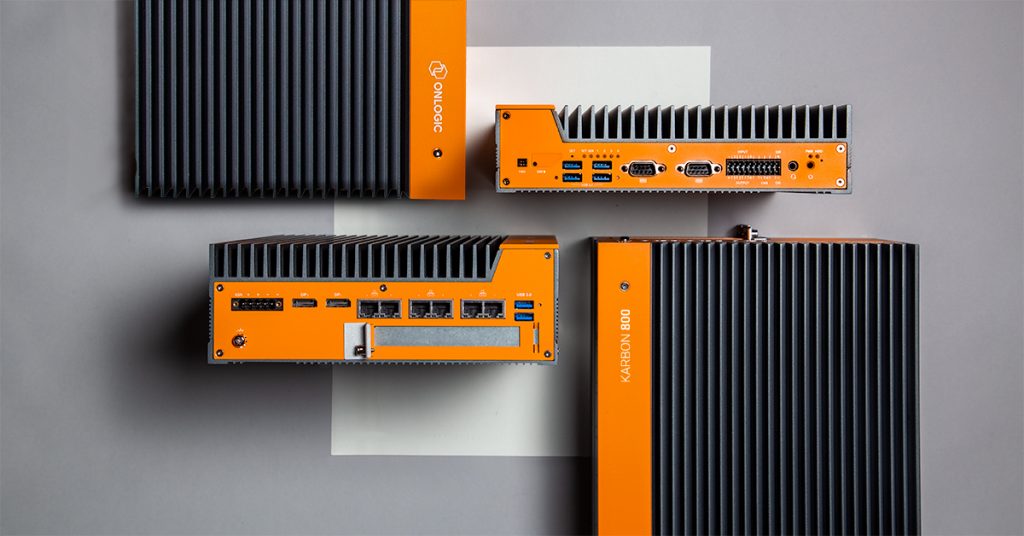 An edge server fits the location you need it to, so there is no “typical looking” edge server. We have concentrated on multiple platforms, from fan-cooled boxes to fanless systems, to rackmount servers.

Maybe you need a rackmount with multiple CPUs, storage, or connectivity. Thinking about that whole breadth of what our customers really need to solve their problems is important as we craft our solutions. The edge servers here as we’ve been developing them have a wide range of form factors to meet the needs of different environments. We have systems like the Karbon 800 with Intel Core processing up to i9 and the ability to operate in environments up to 70 degrees Celsius. We also have a line of very powerful AMD servers.

What features make up an edge server?

The idea of an edge server is the compute power with connectivity and being where it needs to be. Karbon 800 can handle up to an Intel i9 processor that allows a lot of compute, but it also can handle expansion. Our unique ModBay technology lets you customize the system with a wide range of connectivity and expansion to suit your project. We can also equip the server with Wi-Fi and 4G cellular. This connectivity at the edge enables the decision making. Being connected to the network or cloud is an important part of that.

Other options include our small but mighty system – the MC850. It’s an amazing box because for the size of it you’re getting a scalable Xeon processor. You can go up to 28 cores and 48 PCIe lanes for heavy computing, especially for AI applications. With the ability to do expansion and add a GPU, the MC850 has tremendous power for such a small box and can fit on a desk, in a NEMA enclosure, or wherever you need.

With these edge computing platforms, we’ve got the solution for everything including virtual reality, parking garages, analytics, video analytics, intelligent NVRs, and other types of applications. All of this embodies what an edge server is; compute and the connectivity in a small box that allows it to go anywhere.

What is the history of edge servers?

Servers have been around for quite a while. The creator of servers, Tim Berners-Lee, worked for CERN in Switzerland in 1989, and was facing a problem. He needed to get data from his scientists all over the world and all the CERN labs, and he wanted to make sure that he could access them no matter where he was.

Tim quietly started the server revolution. He was even brought out during the Olympics, acknowledged by the queen, and knighted!

He tweeted at that time, “this is for everyone.”

Working with Intel, we established that creating networks of computers pushes the ability of compute and connectivity closer to where it’s happening. This is where we see benefits in terms of speed and response time. One example of what edge servers might look like in action is a packing and separation plant where we have the MC850 inside of a NEMA cabinet because it’s small enough to fit. The system makes decisions about the robotic arm that’s doing vision analysis, and it’s able to make those decisions right there in the location in real-time. We also have 1U servers that are going into a custom cabinet that’s in the middle of a desert. It’s protecting its location and doing security and analysis right there on site.

There are a lot of other amazing applications involving decision making where a data center isn’t going to make sense, but there are also examples in security where data centers are part of the solution as well. This scalability allows innovators to handle real-time decision making, analytics, and processing onsite and remotely through a variety of deployment methods.

You can think of it like an extension of edge computing. Except instead of using lightweight, smaller systems, you’re using more powerful, more capable systems to do that. With edge servers, we’re putting that power all the way out to the edge as more and more people are requiring it. However, the problems that they’re running into with processing and analysis on the edge is something we’ve been able to solve with our powerful solutions.

The smarter the industry gets, the more powerful computers need to be. Take video analytics in security at a crowded event, for example. The analytics can do detection of problematic people or problematic situations right at the source. We’re working with a solution provider right now doing video analysis preventing crime, theft, and other loss events. There are so many examples of how edge servers are being used now, and where they’ll be key in the future. Currently, autonomous vehicles are really moving analytics to the edge in a very big way to speed decision making.

Our customers are solving problems. Sometimes it’s through software and we’re able to make their vision a reality with our hardware. We’re the last bit that makes ideas come together.

At OnLogic, we’re able to design hardened industrial boards and systems. In addition, we work with our suppliers all the time to do a long life cycle to have that long-lasting solution people are dreaming of.

Edge servers are not a one size fits all solution. There are different ways to solve problems using different technologies, connectivity, processing, and form factors. We have edge servers designed to solve even the most complex technology challenges. For additional information on edge servers, or for help choosing and configuring the right solution for you, contact us today.