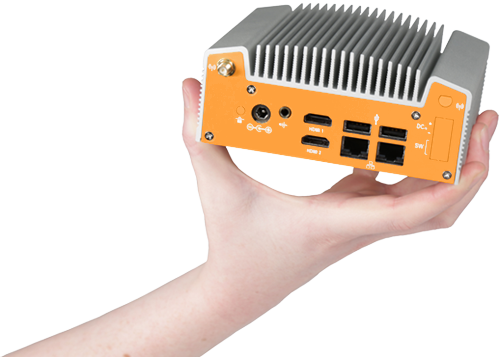 The ML100 Series blends high-performance IPC engineering with the Intel NUC form factor, resulting in a computer as versatile as it is compact.

With 4G LTE connectivity (coming soon), the heart of your application can stay connected without needing to rely on WiFi or wired Ethernet. Perfect for failover protection, on-site network independence, or remote applications.

The ML100 Series protects electronics by directing electrostatic discharge through the case with the use of EMI shielding conductive foam gaskets. The ML100's nickel plated interior provides additional EMI protection.

Protected by nickel plated steel and an aluminum extrusion, the ML100 Series brings aesthetic beauty to the industrial space. Defend against wear and tear, scratches and corrosion with the chassis’s durable textured paint and clear anodized finish.

The ML100G-53: With increased performance in the form of Intel's new Whiskey Lake processors and support for 4 displays, up to 64 GB of RAM, and NVMe SSDs, the ML100G-53 is a compact powerhouse of a system.
The ML100G-41: Featuring AMD's Ryzen™ 4000 processors up to 8 cores, this system comes equipped with onboard AMD Radeon™ graphics, up to 64 GB of RAM, and supports up to four displays (including 2 over USB Type C).

From prototype to distribution, OnLogic’s team of experienced professionals will ensure the successful implementation of your project, each step of the way.