WATT You Should Know About Processor Power

When you are talking about processors with high performance and impressive stats, there is a key number you want to watch out for, especially in industrial and embedded applications: the watts. What’s watts got to do with it? You’ve seen the stat in the system — 35W, 65W, 90W, etc. Here’s what you need to know. The world of processors is a lot like the world of cars. People yell for more POWER and buy the latest and greatest without thinking. More speed! More horsepower! Damn the cost! With cars that often ends up with you holding a big bill or stuck in a ditch when you end up with too much car. With processors it’s much the same: you can end up with more “power” then you need, a processor that costs an arm and a leg, and buyer’s regret.

Define: watt
wät/
noun: watt; plural noun: watts; symbol: W
The International System (SI) unit of power, equivalent to one joule per second, corresponding to the power in an electric circuit in which the potential difference is one volt and the current one ampere.

First off, we need to understand that power is used in two senses in the computer world. Power is often talked about as the overall processing power eg the GHz. But as important is power consumption. That second meaning is expressed in watts.

More watts is not better or worse — it’s just the amount of power it takes to run the processor at full capacity. However, the higher the number, the more your electricity bill is ticking up and the more heat is being generated. Processors that perform tasks at a greater speed inherently require more power, but more and more are optimizing their energy efficiency. To return to the car analogy, it’s like engines that perform as well, on less gas. 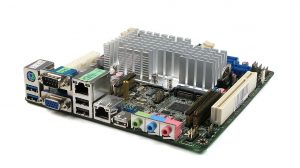 Efficiency and Reliability are Kings of the Industrial and Manufacturing Hill

While a processing power race is happening in the consumer space, in industrial and manufacturing industries, there is a focus on reliability and efficiency. An industrial control system for a 10-year-old million dollar machine that runs on a line doesn’t need a huge amount of processing power, like you might want for a gaming computer. Instead, it needs just enough juice to run the line of control software all-day long, every day without fail, at the lowest cost possible. Anything more is a waste, anything less is a disaster.

In terms of Return on Investment (ROI), low power consumption processors on industrial motherboards reduce downtime and increase their lifecycle. Why? For the same reason Hondas run longer than Hummers.

Low watts are also the difference between money in the bank, and bills to the power company. How much? Lets take a look.

Green is the New Black

Simply saying money can be saved or that there is money you might be wasting is not enough — let’s crunch some numbers. I have selected three processors, each with vastly different power ratings. The equation to calculate the power consumption is (A/1000)*B*24*365 where A is the watts and B is the cost of power. In the United States, the average Kilowatt hour cost of about 12¢ (EIA). Though it varies by region, I’ll be using that as my basis. Let’s see how it works out.

That is maximum utilization, 24 hours a day, 7 days a week, 365 days a year. Which is not uncommon usage on a manufacturing floor running triple shifts or for a digital kiosk that runs night and day or a remote data collection station monitoring seismic activity and the like. Some industrial uses can probably lower those numbers based on their usage, but since we are focused on heavy industrial and manufacturing use, we are going to go with maximum utilization,

Less Heat is Much Cooler

There is a fairly complicated equation that derives the exact amount of heat that is produced by processors, but the short version is that watts produce heat. This means that some sort of cooling needs to take place so the board doesn’t melt, and the more that needs to be done to remove heat, the more complex it is going to get.

Processors are often cooled with heat sinks. They are pieces of heat conductive materials like aluminum and copper, shaped to maximize the surface area, diffuse the heat over more space and dissipate it into the surrounding area. This is why many fanless systems have fins or ribs, as the cases themselves are massive heatsinks.

However, the more powerful the processor, the harder it is for passive cooling methods to keep up. At a certain point, a fanless case will no longer suffice and one that supports a fan must be used to keep it cool. While they add a fractional amount of power to the consumption equation, even a large fan is adding only about 2w (or $2.10 a year), the bigger concern is the effect on system reliability.

But if you have a low power processor you no longer need a fan. Problem solved. If you would like to learn more about fanless computing, check out our whitepaper, “The Benefits of Fanless Computing“.

In the long run, picking the right processor can save you money by eliminating wasteful power consumption. Finding the right speed, price, and lifecycle are all factoring into your decision, but be sure to keep watts in mind as well. Contact the experts OnLogic to answer any questions you might have, and learn more about low power consumption options available for you.