The differences between edge computers 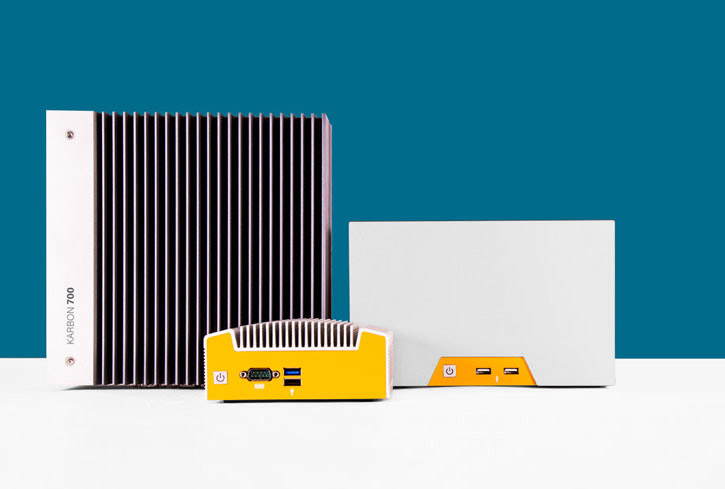 The differences between edge computers

Searching for edge computers can be hard. This guide on the differences between edge PCs will help you find the right solution, fast.

What’s the difference between edge computers?

The previous post in our How to Find an Edge Computer series broke down edge computers into three simple categories: fan-cooled, fanless, and rugged. In this post, we’re exploring the traits of edge computers to understand their differences. Arming yourself with this information makes finding the right hardware much easier.

We can break down an embedded computer’s characteristics into six general traits. Comparing your needs to these traits gives you a quick way to narrow your selection based on the variables most edge computer deployments face.

The graphic below is a simplified guide to help you understand the differences between edge PCs. We’ll dive into these traits, what they mean, and highlight key factors to consider when sourcing edge computer hardware.

A high rating means the system tolerates these extremes and can withstand instantaneous and endurance events that involve them. For tough environments, survivability should be your first consideration when selecting an embedded computer. For these circumstances, rugged edge computers are a great place to start.

High survivability doesn’t mean the system is indestructible, though. Even the toughest computers have limits. We recommend stress-testing your system in the environment they’ll be working to ensure consistent reliability.

Moving down the scale means the system doesn’t have as high a level of protection from shock, vibration, and extreme temperatures. These fanless systems still resist heavy amounts of dirt, dust, or debris and tolerate minor, infrequent impact forces.

The next level down are systems that use fans to cool their components. This lowers the overall cost by eliminating more highly-engineered cooling solutions. However, they do not provide the level of survivability that rugged and industrial systems offer because of its vented chassis and additional moving parts. That doesn’t mean these systems aren’t reliable, though. They are a great option when used in clean climate-controlled environments.

A high pollution class rating translates to protection from these contaminants with a fanless design and protective shielding gaskets. These tactics prevent foreign material from entering.

Conversely, a low rating indicates a vented system actively cooled with a fan. This doesn’t mean the system is inferior or unreliable. It simply shows the system isn’t designed with those protections in mind.

Deploying a system with a low pollution class rating in a particulate rich environment invites catastrophic system failure. Understanding the level of pollution in deployment environments helps mitigate this problem.

Ruggedized computers tolerate up to 50G’s of shock and vibration in order to survive in-vehicle, railway, and other mobile applications. Therefore, they receive the highest rating in this category.

A combination of mechanical tactics absorbs and redistributes energy through the system to protect it. Using shorter components that resist lateral energy, mechanically clamping sections of the board, and designing boards with enough stiffness to resist resonant destructive vibrations with minimal interconnections provide this protection. If you expect things to get physical in your deployment, start your search with rugged systems.

A fanless industrial system generally lacks this level of shock and vibration dampening. However, the fanless design and integrated heat spreader add some durability over a fully vented, fan-cooled system.

Vented, actively cooled commercial systems are rated for delivery and transit. They survive being bumped and jostled during shipping and installation. They do not provide the protection required for mobile installations.

EMC is the system’s tolerance to interference caused by fast transients and voltage discharges. These cause erratic performance, malfunction, or damage to the system. Electricity favors the path of least resistance. What better path than the delicate circuitry inside a computer?

Computers operating in industrial, manufacturing, and similar environments require this protection because this threat is so prevalent. We’ve gone into detail on how to apply power best-practices for industrial deployments. The takeaway is that installations that do not follow these best practices are at risk from static discharge, voltage loopbacks, power outages, and lightning strikes.

The power supply also provides significant protection. It is the first line of defense for power-related threats. Skimping on the power supply to save money is a strategy often costing more in the long run. The power supply stabilizes and filters power so it doesn’t harm sensitive internal components. We’ve seen entire racks of systems rendered inoperable by inadequate power supplies, creating significant cost and downtime.

There are several factors that make an edge computer tolerant to this type of threat. Integrating the chassis with EMC shielding and double right angle folds direct electrical and RF pathways into the grounded chassis. Systems rating highly in this category also have internal power management and transistors as buffers for electrical transients.

Rugged systems feature robust tolerance for EMC. They are designed to operate in environments with variable or unpredictable power. Fanless systems are well protected but lack some of the advanced power features rugged computers have. Fan-cooled systems are more susceptible to EMC interference due to their vented chassis. But, they serve reliably when installed in the proper environment.

Edge computers are now being deployed in every corner of the globe. As a result, meeting the regulatory requirements of each country is important for system and personnel safety.

A highly ruggedized system usually meets or exceeds many global standards. This is due to extensive testing to measure the efficacy of its ruggedization and assign any applicable certifications. As a result, these systems commonly carry CB Schemes, UL listings, and other regulatory certifications. Utilizing hardware manufacturers who go through the effort to attain these certifications for their systems saves time and money when deploying edge computers on a global stage.

Fanless and fan-cooled systems generally meet a number of these standards, but usually to a lesser degree than rugged computers. Knowing what regulatory waters to navigate is important because the requirements for different countries will vary based on region.

Generally speaking, FCC and CE testing from an A2LA accredited lab combined with a CB scheme from an NRTL lab provide the best foundation to navigate global environments. The CB scheme for safety, recognized by over 50 countries, saves time and cost of additional in-country testing.

Much of the world uses CE emissions and immunity standards. Even if a country does not recognize CE as the accepted standard, chances are high that the testing they do require will have similar, or even the same, test parameters. It’s worth noting that modifying the system or using configuration options not covered in the listing or certification could invalidate the legal protection of these credentials.

Temperature plays a major role in system performance and reliability. The thermal design power (TDP) of the processor and components, cooling methods, environment, and installation impact how the system handles hot and cold temperatures.

When commercial boards are subjected to temperatures below zero, certain devices may shift out of tolerance. At -20°C and below, there are specific board design and layout decisions that are critical to protect. Additionally, moisture in the boards can cause them to de-laminate. The contractions can also break the small thru-holes and bindings that connect the board.

The heat dissipated in this way is significant, but there’s a threshold. When pushed to their heat limit, CPUs throttle performance to protect themselves. This is normal, but it’s important to understand how the system performs under heavy load, especially in hot environments.

This requires understanding the processing needs of the application. For maximum longevity, a system ideally runs at 60-80% of its maximum capacity. This allows it to use turbo boost or additional cores for heavy processing loads before returning to normal cycles.

It’s also important to note that constantly running the system at max performance decreases the longevity of the system. The right mix of performance and cooling is critical for reliability and cost management.

Where to go from here with edge computers

Understanding the traits of edge computers and balancing them against your application needs helps narrow your search. But, it isn’t the only factor affecting hardware selection. Check out our comprehensive hardware checklist to make sure you don’t miss any details when selecting an IoT or edge PC.