What is the Internet of Things? - Logic Supply Blog

What Is The Internet Of Things And How Does Logic Supply Fit In? 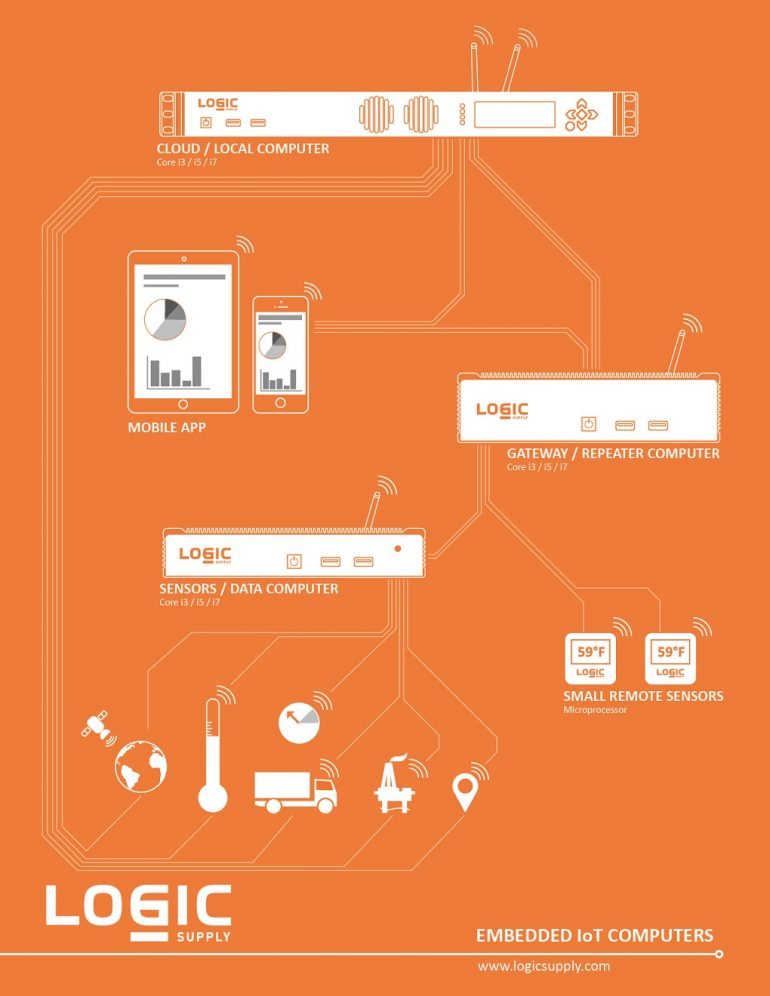 What Is The Internet Of Things And How Does Logic Supply Fit In?

The interconnectivity of “stuff” has emerged (relatively quickly) from the realm of science fiction into a full-fledged, thriving industry. In many ways Logic Supply was designing innovative, rugged computer solutions for the Internet of Things long before the catchy name caught on, with 80% of our customers connecting our systems to some form of network. But now, as devices begin to speak to, and work, with each other independently of their human operators, the potential social and financial impact of the movement is causing industry leaders to sit up and take note.

In a rare example of big business teamwork, Intel, Cisco, IBM, GE and AT&T are putting their heads together to try and paint a clearer picture of where the tech sector’s latest, and perhaps most potentially impactful, trend is headed. With some 25-50 billion network-connected devices predicted to come online in the next decade, there’s a lot at stake in ensuring that everyone, and everything, is speaking the same language.

The Vision of an Internet of Things

Essentially, IoT leverages wireless connectivity and cloud computing to allow machines, devices, locations and people to interact seamlessly, constantly sharing data and reacting to each other. From wearable tech that tracks your movements and reports on your activity (think the Nike+ FuelBand), to “smart” appliances, household fixtures and climate controls that can monitor and adjust to your actions and habits (or even each other’s) to carry out operations with little or no direct input by the user, the increasingly-interconnected nature of our everyday lives is undeniable.

You can already purchase a smart refrigerator capable of keeping tabs on your milk and egg supplies and alerting you to any potential breakfast interruptions, but the future of IoT envisions a world when your fridge tells the grocery store what items you may need as your car pulls into their sensor-laden lot, where your items will be ready and waiting for you thanks to cloud-connected picking machines. It’s a brave new world, and one that’s blinking brightly on the radar of a wide array of industries.

The Big Data Potential of IoT

While the concept of the IoT has been around since the early 90s, major corporations have begun to trip over each other to position themselves as thought leaders in the field. Intel’s Intelligent Systems Alliance was recently re-branded as the Intel Internet of Things Solutions Group and late last month they announced the creation of the Industrial Internet Consortium (IIC) with the other big business cohorts mentioned above.

The IIC sees the implications of the Internet of Things, or the Industrial Internet as they refer to it, as the next major advancement in the infrastructure of production, going as far as calling it the, “natural successor to the Industrial and Internet Revolutions.” While that may smack of hyperbole on first blush, it’s not outlandish to imagine the always-on, permanently connected devices that increasingly populate our homes, cities and factories creating a genuine paradigm shift in the way we live sooner rather than later.

A production facility that’s able to intelligently react to supply chain problems, tooling downtime or staffing fluctuations has the potential to drastically impact efficiency and profitability. It was a trend that IBM championed back in 2008 with their Smarter Planet initiative, detailing the ways the world’s systems were becoming more instrumented, interconnected and intelligent. M2M (Machine to Machine) communication has been an important part of industry for years, but by integrating much more robust networking with the versatility of cloud access and smaller, more capable industrial PCs, IoT technologies take a much broader approach to devices that are able to make decisions and take actions completely on their own.

According to Morgan Stanley there were about 8.7 billion devices connected to the internet in 2012. By 2020 they predict that number could balloon to 75 billion. Leading American information technology research and advisory firm Gartner has postulated that by that same year any device priced at more than $100 will be “smart” and internet capable. Further driving home the point, The Mckinsey Global Institute predicts that the economic impact of the Internet of Things could amount to between $2.7 and $6.2 trillion per year by 2025. That’s trillion…with a T.

With that many connected objects in play, and with that much money at stake, the challenge lies in laying the infrastructure to support and sustain the increasing demand for interconnectivity. With so much data moving to the cloud, significant improvements will need to be made to storage methods and routing networks. The sheer volume of wired and wireless signals is likely to cause a number of unforeseen challenges, and these are the problems that the IIC is hoping to stay ahead of.

Other Initiatives of the IIC

Even with as “intelligent” as many systems have seemingly become, only around 5% of devices on the average factory floor are currently connected to a network. One of the primary challenges that the IIC is hoping to tackle is the need to standardize communication strategies to make sure current and future devices are speaking the same language.

In addition to creating interoperability standards, the IIC hopes to encourage open communication between industry and thought leaders to speed development and innovation of real-world applications. By providing open membership the IIC is inviting individuals and organizations from around the world to the table, opening up the opportunity for rapid growth and unprecedented cooperation in the field.

Where Does Logic Supply Fit In?

Logic Supply engineers are well-versed in the challenges that an always-on, perpetually-connected society present for both hardware and software providers. Many IoT systems require devices that can operate reliably with little or no human interaction. Fortunately while the Internet of Things may represent a sea change in approach for many companies, Logic Supply has built its reputation around exactly the kind of flexible, versatile and ultra-reliable systems that are being relied upon to power the industrial applications of the future.

Our clients are already utilizing Logic Supply systems for mobile asset tracking in law enforcement and shipping applications. Our building automation and remote access control technologies are being employed to secure warehouses and facilitate energy management systems for corporate, government and military installations.

For us, the Internet of Things is less of a revolution and more of an evolution that combines the ideas of a Smarter Planet, M2M technology and a cultural shift in the way we all live. It’s certainly an exciting time to be a hardware provider.

We’d love to know what you think. What potential solutions, or problems, does the IoT present? Are you already seeing the impact of IoT technologies in your day to day life? What does the immediate future hold for internet connected objects?