Home>Posts>Tech Explained>What Is The Industrial Internet Of Things (IIoT)? Examples, Key Industries and Looking Ahead

What Is The Industrial Internet Of Things (IIoT)? Examples, Key Industries and Looking Ahead

What is the Industrial Internet of Things? In its simplest form, the Industrial Internet of Things (IIoT) uses data from machines and sensors to enhance manufacturing and other industrial processes. A good example of Industrial IoT is predictive maintenance. In a manufacturing setting, sensors embedded in equipment monitor system performance and the condition of components. That information is combined with software to help operators anticipate and schedule service needs before equipment failures occur.

As the name indicates, the Industrial Internet of Things builds on the concepts of the Internet of Things (IoT). IoT describes physical objects that are embedded with sensors, processing ability, software, and other technologies, connected by a network, allowing them to exchange data with other devices and systems.

Examples of Industrial Internet of Things applications include:

The Vision of an Industrial Internet of Things

Back in 2020, writer David Maayan wrote in Security Today that there were essentially 5 types of IoT applications:

These classifications are helpful in breaking down the overly broad umbrella term, “IoT”. That said, there is overlap between many of the solutions listed above. Given the inherent interconnectivity of the solutions within IoT, a universal definition of IIoT is hard to come by, but David’s methodology provides a solid foundation.

The Future of IoT Example

You can already purchase a smart refrigerator capable of keeping tabs on your milk and egg supplies and alerting you to any potential breakfast interruptions. This would be an example of Consumer IoT. But take things a step or two further and you begin to introduce elements of Commercial, Infrastructure and Industrial IoT.

The future of IoT envisions a world where your fridge texts you what items you need. When you’re ready, you place an order from home. As your car pulls into the store’s sensor-laden lot, your items are ready and waiting for you thanks to cloud-connected order picking machines at the store. The changing inventory of the store is then communicated to centralized warehouses for restocking. That information is further fed to farms and production facilities to optimize output to the warehouses.

The Big Data Potential of the Internet of Things

While the concept of the IoT has been around since the early 90s, a common language and mission has always been difficult to define. With so much potential value in doing so, groups like the Industry IoT Consortium (IIC) have sprung up to attempt to make sense of things. Founded in 2014 by AT&T, Cisco, General Electric, IBM and Intel, the ICC website indicates that they “help organizations identify best technology practices, build credible brands, and transform their businesses”.

What does that mean in practice?

Imagine a production facility that’s able to intelligently react to supply chain problems, tooling downtime or staffing fluctuations? It was a trend that IBM championed way back in 2008 with their Smarter Planet initiative, detailing the ways the world’s systems were becoming more instrumented, interconnected and intelligent. M2M (Machine to Machine) communication has been an important part of industry for years. But, by integrating more robust networking with the versatility of cloud access and smaller, more capable industrial PCs, manufacturing machines can now make decisions and take actions completely on their own. That’s the power of the Industrial IoT.

IoT By The Numbers

According to a recent report from IOT Analytics, a firm that specializes in insights into the Internet of Things industry, they expect there to be more than 27 billion active IoT connections in 2025. With that many connected “things” in play, and with that much money at stake, part of the challenge for builders of IoT solutions lies in leveraging or creating the infrastructure to support and sustain the increasing demand for interconnectivity. The same IOT Analytics report indicates that the number of connected IoT devices using cellular technology grew 18% year-over-year (YoY), reaching 2 billion by the end of the first half of 2021. 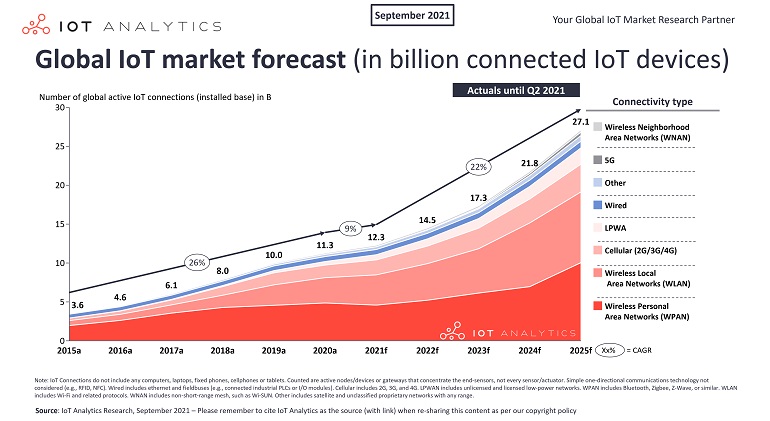 Where Does OnLogic Fit In?

OnLogic engineers are well-versed in the challenges that an always-on, perpetually-connected business presents. Many Industrial IoT solutions require devices that can operate reliably with little or no human interaction. Fortunately while the Internet of Things may represent a sea change in approach for many companies, OnLogic has built its reputation around exactly the kind of flexible, connectible, meticulously engineered systems that are being relied upon to power innovations in virtually every industry. For us, the Internet of Things is less of a REVOlution and more of an EVOlution. It combines the ideas of a Smarter Planet, M2M technology and a cultural shift in the way we all live and do business. If you’re working on creating an IIoT solution of your own, or need a new hardware solution, reach out to our team.