How Small is Small? Meeting the Size Requirements of Today’s Embedded Computers

The two primary demands on computer designers have been essentially the same for years: create increasingly powerful systems and do so in an ever-shrinking footprint. The consumer market has always focussed primarily on raw processing power, advanced graphics capabilities and eye-catching aesthetic design. Those features are important to Industrial small PC designers as well,. But commercial integrators must also focus on the longevity, life cycle and ruggedness of their small form factor computer systems. The resulting smaller and smaller devices demand immense amounts of processing and computation power.

With processor architecture struggling to keep up with Moore’s Law, and chipset manufacturers beginning to run up against the limits of what is physically possible, hardware designers are relying on innovative enclosure design and cutting edge cooling technology to continue to meet the demands of system integrators and engineers building the latest generation of devices.

So, what qualifies as a “small” industrial computer these days? What are the necessary trade-offs in achieving such a small form factor PC? And what are the commercial needs that are driving the continued shrinking of embedded computer systems?

From the start, the overall size of computers has traditionally been driven by the size of the motherboard. Crack open a traditional computer tower and you’ll find a lot of empty space. Wire routing and future expansion aside, much of this seemingly unused real estate just provides airflow for internal components. Just like us, the harder a computer system works the hotter it gets. All that empty space, along with strategically placed fans, keep temperatures inside the tower from getting out of control and causing failures.

The introduction of the Micro-ATX form factor in the late 90s ushered in a new era of smaller, fully featured mini computers, but it wasn’t until the even smaller Mini-ITX began to take off, with the launch of Mini-ITX 2.0 in 2008, that ultra-compact industrial PCs really came into their own. Smaller still, Intel’s Next Unit of Computing (NUC), which measures only 4in x 4in is the latest in an ever-shrinking line of fully featured motherboards to find itself being employed in embedded applications. Even units previously only used by hobbyists like Raspberry Pi are being implemented by hardware engineers in increasingly rugged, industrial applications.

These smaller motherboards initially found their way into only slightly smaller cases. But, innovations in cooling have now opened up the doors for engineers to create fully-featured systems that take up less than a 10th of the space of traditional towers. Passive cooling technology, based on a variety of thermodynamic principles, has resulted in fanless systems. These systems are able to effectively dissipate the heat of today’s modern processors without the need for bulky cases or noisy, failure-prone fans. Want to learn how fanless PCs stay cool? Check out our Tech Edge video on fanless cooling.

What Is Driving the Demand For Compact Computer Systems?

So, who needs these diminutive hardware platforms? Here at OnLogic, we regularly speak to clients who are seeking a smaller alternative to their current computers, or working on a new project that demands a system that can function in extremely limited space. Once upon a time, we discussed PC space constraints in “total feet”. However, today’s advanced embedded systems must conform to standards measured in millimeters.

“The concept of a ‘small computer’ causes a lot of people to picture a mini desktop system that saves on desk space and cord clutter. But that’s far from the only reason our clients need a small form factor device,” said OnLogic Technical Sales Specialist Steve Winn. “We work with military and law enforcement agencies who are installing control systems into fast response vehicles and need something that can be tucked under a seat. We have security and surveillance clients who need a small computer that doesn’t shout to the world that it’s a PC and can be easily hidden from view or even installed directly into a camera housing. In industrial control or workstation applications, the system may need to mount under a desk, on a wall, or on the back of a monitor, where a bulky, heavy computer simply wouldn’t be practical.”

Regardless of the specific need, the overall aim of squeezing the most performance into the smallest overall package remains the challenge. It is one that our hardware engineers are most focused on. 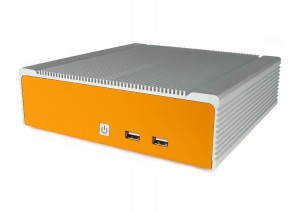 With more and more of these small computers hitting the market, what differentiates one from the next? Intel’s launch of the NUC spawned a huge number of consumer grade mini-PCs. Most of these utilized fanned, plastic enclosures that were ill suited for commercial applications. The other major limitation of consumer hardware is a lack of customization. While it’s often possible to choose basic parameters like memory and storage, many commercial applications require specific components, software compatibility and I/O. Meeting these specifications can be difficult in the pre-configured, one-size-fits-all consumer offerings.

The fact is that a consumer mini-PC and a small industrial computer are as different from each other as the old style towers are from today’s ultra-compact machines. Here at OnLogic, we’ve designed our energy efficient, compact systems with a variety of industrial I/O and a wide operating temperature range to meet the needs of our embedded and industrial clients. Systems like the ML300 and ML400 series have been specifically engineered to be expandable and customizable to offer the various combinations of features required in the latest generation of embedded systems. 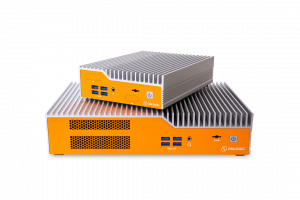 But just because you need a small system, don’t think that you have to sacrifice power. Our Helix series offers compact units that harness the power of Intel 10th gen computing.

As motherboard form factors continue to evolve the systems built around them will need to change in kind. The shrinking size of technology as a whole will continue to drive innovation in the IPC industry. OnLogic will be there every small step of the way.