We are offering three new NVIDIA ION-based Mini-ITX mainboards at Logic Supply. Two are from ZOTAC and one is a Pegatron offering. Each is geared toward multimedia applications, offering HDMI, DVI, VGA, and digital audio. Although the back panel I/O is beefed up, the onboard I/O is pretty slender with just the bare minimum connectors to get by. Neither of them have IDE (no real surprise), but instead offer 3–4 SATA connectors. The ZOTAC features RAID 0, 1, and 0+1, while the Pegatron version has it disabled. We’re still trying to figure that one out… and the Pegatron version also features RAID 0, 1, and 0+1 with an updated BIOS (version 09.03).

Our ZOTAC ION selection is: ZOTAC ION B-E Mini-ITX Mainboard, IONITX-B-E featuring the Intel Atom 230 processor and the ZOTAC ION A-U Mini-ITX Mainboard, IONITX-A-U featuring the dual core Intel Atom 330 processor, onboard power, and pre-installed PCIe Mini wireless card with antenna. These boards are practically identical, with the exception of the onboard power, processor, and wireless card. And, of course the price. 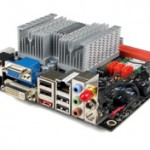 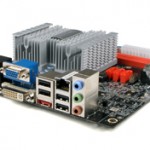 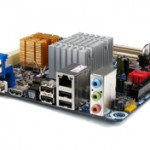 Our Pegatron option is the IPX7A-ION Mini-ITX Mainboard. It touts a dual core Intel Atom 330 processor, 4 SATA connectors, and PCIe x16. The PCIe x16 slot seems to be an afterthought for this board and we wish that it had the PCIe Mini Card slot like the ZOTAC. Generally PCIe x16 slots are reserved for graphics cards, and well, if you’re buying an NVIDIA ION board, the hope is you won’t need an additional graphics card.

All three of these boards are targeted at the HTPC market and even make great digital signage players, for the short-term. The ION-Atom-330 combination is not a long-term support platform, and we are shying customers away from developing any projects on these with the exception of prototyping. The hope is that we’ll see a Mini-ITX board with native support for high-end HD graphics, low-power consumption, and long-term support.  Whether or not it’s through a hardware decoder installed into a PCIe Mini card slot or if it’s when the NVIDIA ION pairs up with the VIA Nano (if rumors serve true), we’re counting on it happening.

So far, none of our other mainboard manufacturers are releasing Mini-ITX boards with the NVIDIA ION chipset and Intel Atom processor combo. We’re seeing some full systems (both from AOpen and MSI) in the pipeline. The AOpen one will likely be a Digital Engine revision and the MSI one has already been leaked: the D200 nettop. The D200 is designated for the consumer market, so it is highly unlikely we’ll get our hands on one.