You may have noticed on your LinkedIn feed that it is officially trade show season. But unlike the last two years, we’re not seeing screenshots of folks in their bedrooms doing their best to hide piles of laundry, or avatar conference ‘halls’ reminiscent of video games from the early aughts.

No, this time we are seeing something which feels novel in 2022: groups of strangers walking around an exhibition hall. Yes, you’ve heard it here folks: trade shows are officially back in action (and in-person). The OnLogic team experienced it first hand at embedded world in Nuremberg, Germany and the “largest and most inspiring showcase of automation in North America,” Automate Show, in Detroit.

What is Automate Show?

Automate Show, put on by the Association for Advancing Automation (A3), is the largest solutions-based showcase of automation, robotics, vision, motion control and more in North America. This year, the Automate Show 2022 ran from June 6-9, at Huntington Place in Detroit, Michigan. There is something to be said for having the opportunity to access leading innovations in industrial automation, in a city with such a rich history of manufacturing.

The four day event consisted of an exhibition hall with more than 500 booths, as well as a stacked lineup of keynote sessions, panel discussions with industry experts, workshop sessions for conference attendees, and plenty of other cool opportunities – like the Cowen Startup Challenge. 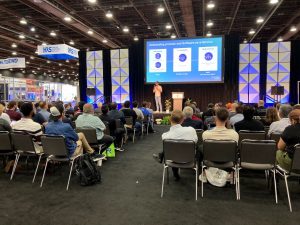 Uniquely, Automate is free to attend for anyone 12 years or older with an interest in robotics and/or automation. Don’t worry, no proof is necessary. While the event was back in-person, it was also nice to see options to participate in virtual sessions.

With more than 24,000 registered attendees, the show brought together professionals from a huge range of industries and even a shark! No, not like the one from Jaws, but one from a TV show nevertheless, and one which also happens to have an ominous soundtrack. 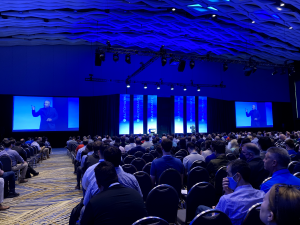 Daymond John, of Shark Tank, FUBU, and a whole bunch of other successful businesses, gave a lively presentation of goal-setting. He also offered up plenty of jokes at the expense of the other ‘sharks’. It was nice to start off the day with a good chuckle or two.

Organizers of the event hinted at the target audience for Automate Detroit, stating “If you’ve ever wondered how robotics, vision, motion control and more can help you unlock higher product quality and lower costs for your business, this show is the key.” In conversations with exhibitors and attendees alike, there was a lot of excitement around being back at it.

We asked Steve Winn, Account Executive at OnLogic, what it was like to return as a seasoned tradeshow veteran. “The show was very well attended –  you could feel the buzz in the room. There was a sense that people needed to get out, be seen, and to show their solutions. You could really feel that. I was definitely taken aback by the number of people. This was at pre-pandemic magnitude.” 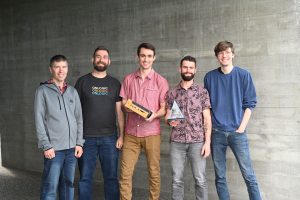 While the OnLogic team has showcased industrial automation hardware solutions as exhibitors at Automate in previous years, this year we joined as attendees. We enjoyed the experience standing on the other side of the table, walking around the exhibition hall, meeting with customers and partners, exploring new solutions, and taking it all in.

Undeniably, a highlight was accepting the Vision Systems Design Innovators Award for the Karbon 800 Series. On Monday, Vision Systems Design Magazine hosted an award ceremony at the Automate Show Theater, recognizing innovative technologies, products, and systems found in machine vision and imaging. Recipients were judged on “originality; innovation; their impact on designers, systems integrators or users; and whether they fulfilled a new market need, leveraged a novel technology, and/or increased productivity”.

We received a Silver Innovator Award, for the newest addition to our Rugged Line of computer hardware. The Karbon 800 Series is designed for Industry 4.0 and Industrial IoT applications. These systems are built especially for those that require powerful computing in harsh environments or remote locations.

It was rewarding to see the Karbon 800 Series recognized among the best in industrial automation hardware and we’re excited about the machine vision and AI solutions that it will help to power.

The future of automation

What does the future of automation look like? Efficient? Shiny? Like something out of a sci-fi movie? It is nearly impossible to list all of the interesting technologies. But here are a few things that stand out: 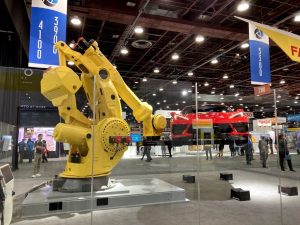 Unofficially known as “the show stopper”, this demo is not something to miss. In fact, it would take a lot of effort to do so. You may have seen videos on social media, because their 6 axis robot – the strongest on the market – was busy lifting a shiny candy apple red corvette up and down non-stop, smack dab in the middle of the exhibition hall.

The M2000iA series can handle up to 2.3 t and reach up to 4.7 m. This is the sort of industrial automation that will be powering the future of automotive manufacturing. It was nothing short of impressive, and bonus, it made for a convenient meeting point.

If you have walked a trade show floor you understand the importance of at least two things: comfortable shoes and caffeination. While there were no Dr. Scholl’s being handed out as swag, there was a Dr. Presso.

I know that automated coffee may not seem all that special. But I noticed something as I awaited my iced americano. This robot arm was not only able to brew the coffee and fill up the cup with ice, but managed to cap the cup with such precision and arguably, grace.

After doing a bit of research, it turns out that this is a unique feature. This is the only robot on the market that does such a thing. I noticed more of these subtle but impressive movements at a number of booths. Lesson: It’s not always the flashy things that make an impression, but the small details, too. Automation of this type has come a long way and continues to advance, making new applications possible.

A lot of the discussion around the future of automation includes investigation of the interplay between humans and machines. One of the major benefits of certain technologies is a new level of safety. Here enters Honeywell’s demo featuring an Autonomous Mobile Robot (AMR). They organized an integrated demo featuring the OTTO Lifter, a new autonomous forklift.

These were just three examples of the hundreds of demos we saw. If you want to dig deeper into what other technologies were being presented at Automate Show, you can get a full run down on the other hundreds of exhibitors here. 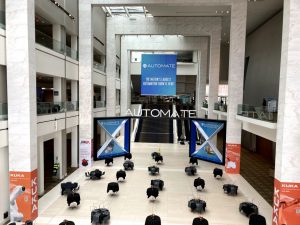 1. Trade Shows are a valuable way to engage with the industry

Over the last two years we pivoted, we adapted, we learned a lot. Industries figured out new ways to meet and share projects and innovations. Nevertheless, having the key players together in one space provides opportunity to develop connections and partnerships, spark creativity, and who knows what else.

In our team debrief after the show, Roy Gray Jr, Account Executive, shared this of his experience: “I learned a lot. As someone who spent more than a decade in the workstation space, this was a great way to jump into the industrial environment. I was able to see firsthand who the players are, what they do, and where exactly OnLogic fits into the puzzle. This event made it tangible for me…”

2. Business Cards are still very much a thing

As someone who loves to buy books, listens to talk radio, and sends out the occasional snail mail, it was thrilling to see that the physical business card is alive and well in 2022.

To go from a conversation about fully autonomous precision welding, to then shake hands (don’t worry there was hand sanitizer everywhere), and then swap these little paper tokens of acknowledgement felt like a sweet juxtaposition. Yes, you can literally play chess with a robot or fully automate your shop floor, but also maintain some really nice – and really human – exchanges, too.

3. We need more diversity in the industrial automation space

There was definitely a clear gender gap in the space, which speaks to the “robotic elephant in the room”, the overall lack of diversity in the automation industry. It’s a topic that the World Economic Forum addresses in this white paper, which is well worth a read.

4. The future of automation is closer than we think

If you are looking for a way to kickstart your own automation project, don’t hesitate to reach out to our solutions experts.

5. There are a lot more takeaways than what can reasonably fit into one post

Surprise! I couldn’t fit everything into this list, but you can find a list of Automate Show’s own “Top 7 Automation Takeaways from Automate 2022”, right here.

How OnLogic fits into the puzzle of industrial automation

Someone we spoke to shared an anecdote that stuck with us. A visitor scoffed at the prospect of purchasing industrial computers, saying that “what do you think the robots are for”. With only a hint of sarcasm, the gentleman replied with a “well, what do you think powers the robots?”. Essentially you could say that if data is being created or managed, industrial computers are probably involved.

At OnLogic, our hardware solutions power a wide range of industrial automation applications. We offer highly-configurable systems and integrated partner software offerings to provide the ideal compute solution for digital transformation use cases. In other words, we have the hardware that can support your automation solutions. Our industrial and rugged computers are engineered to survive where your average desktop computer would fail – exactly where IIoT devices frequently need to be installed.

Automate Show set to return to Detroit in 2023 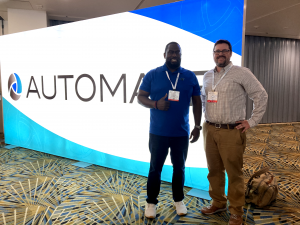 It turns out that this was the most successful event in A3’s history –  glad we didn’t miss it! The organizers of the trade show set new records for the number of registrants, exhibitor booths, and online engagement. Impressive. You can find one of our own #automateshow social posts here.

All this to say, that the