What’s the Difference Between a Rugged Computer and an Industrial Computer?

Both industrial and rugged computers provide maximum reliability and high performance to run powerful software and control complex applications. The difference between a rugged computer and an industrial computer is simply that rugged computers have additional design features to make them ultra reliable and operable in particularly harsh environments.

Most police cars today have a communication system that rivals high tech computer labs of the past. Officers use this computer to access a number of databases to check a license plate, access information about an APB, pull up suspect mugshots, upload images from a crime scene and so much more. Since police and other security workers need to make critical decisions at a moment’s notice, they need access to critical data – fast.

Rugged Computers for Reliability in an Extreme Environment

That sophisticated computer in the police car is subject to vibration and shock with every bump in the road. It is also subject to extreme heat after parked in a sunny spot for a few hours and extreme cold after sitting out on a cold winter night. It also has special power needs – getting power from the car, but never draining the car battery. That is no ordinary off-the-shelf computer. At a minimum, an industrial computer that is resistant to dust, dirt and humidity is a must. But these kinds of requirements demand something more – a rugged computer.

Let’s review some of these features that enable rugged computers to withstand  tough environments.

The difference between a rugged computer and an industrial computer: Rugged Computers Excel with their Ability to Withstand Vibration

Both industrial and rugged computers are designed to withstand vibration. This is necessary in an industrial environment because on a manuf 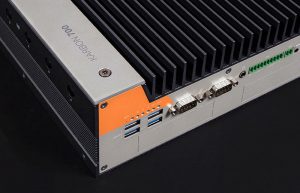 acturing line, the vibration of industrial machines can loosen connections and eventually cause a sudden shutdown. Instead of rotating hard drives and fans, both industrial and rugged computers offer solid-state drives and fanless cooling because a computer with no moving parts is far more resistant to physical shock. They also feature a hardshell casing and vibration resistant components and connections, often without any internal cabling, to minimize failure points and ensure reliable operation.

A rugged computer takes vibration resistance even further. A rugged computer offers an overall stiffer design to resist flex and withstand even extreme shocks – for example if the police car in our story was in an accident. From the motherboard, to onboard components like memory, to the hardshell enclosure – rugged computers are designed to protect the most common failure points when exposed to shock and vibration.

Rugged computers go under rigorous testing to ensure that they can withstand the real-world needs of rugged computing. MIL-STD 810G, originally established by the US government, outlines testing procedures to ensure that equipment certified as MIL-STD 810G compliant will withstand the environment and conditions in which it will be deployed. For rugged computing hardware, MIL-STD 810G is used to identify systems tested to operate reliably in the face of vibration, mechanical shock, temperature shock and extreme temperatures. The Karbon series was tested to MIL-STD 810G standards to resist damage from prolonged vibration and shock up to 50G.

The difference between a rugged computer and an industrial computer: Rugged Computers can Withstand Temperature Extremes

Computers are being pushed even further to the edge where operating conditions are less than ideal. Oil rig operations in a remote desert require a powerful computer that can withstand the outdoors with temperatures that may get unbearably hot. Food manufacturing facilities are implementing robotics inside freezers to do the work that is well below freezing and too cold for humans. Since humans can’t withstand these temperatures, rugged computers perform at these extreme temperatures without an impact to hardware performance and lifespan. An industrial PC, such as the Helix series, can operate at a wide range of about 0C – 50C (32F – 122F). The Karbon 700 rugged PC takes the temperature range to the extreme with an operating range of -40C (-40F) to 70C (158F).

Before you select an industrial or rugged computer for your application, make sure you understand the performance requirements as well as the operating environment. Choosing technology, such as the Karbon Series that has been developed for high performance in harsh environments delivers operational efficiency and ensures a long life. While it is true that the upfront cost might be a bit more for a rugged computer, the total cost of ownership over time is going to be much lower. Rugged computers will withstand the elements over time including temperature swings, vibration, shock, dust, dirt, humidity, power surges, and more.

Choosing the right technology for your requirements will deliver:

Want to learn more? Download our Hardware Needs and Configuration Guide and then contact our sales team to help you make the right choice.

Sarah Lavoie is a content creator for OnLogic. When not writing, she can usually be found exploring the Vermont landscape with her camera looking to photograph something amazing.
Follow OnLogic on LinkedIn