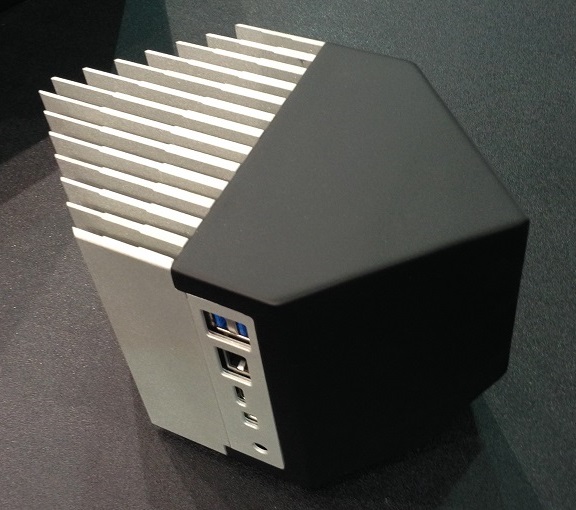 On Day 3 of Computex 2014 the Logic Supply team was treated to the latest in emerging computing technologies, fresh new design trends and even a “World’s First” product launch. They toured offerings from Sapphire, Neousys, ASRock and Streacom and were able to make some exciting observations about what the future holds for industrial computing.

A World’s First from Neousys Neousys debuted their Nuvo-3616VR, an Intel Core i-based system that’s the world’s first fanless computer with 16x GbE LAN ports, designed specifically for rugged surveillance applications. The most powerful surveillance computer on the show floor, the 3616VR can be configured with an Intel i3, i5 or i7 processor and features quad 2.5” SATA ports with Raid support and an operating temperature range of ~25C-60C.

We mentioned them in our Day 1 blog, but the Logic Supply team had some more time to check out the new 3.5” Single Board Computers (SBCs) from ASRock. The SBC-210 and SBC-310 feature enough I/O to make them an attractive option for digital signage and factory automation applications. One standout feature of many of the new industrial PCs on display at Computex 2014 has been a departure from the industry standard black box. Many manufacturers have begun to embrace colors other than standard black and grey, populating their displays with machines in reds, blues, browns and other unique hues making for a much more visually diverse product line.

In addition to new colors, hardware providers like Streacom presented interesting new chassis form factors. Streacom’s N3 (pictured above) is a uniquely angular machine with large cooling fins and a shape that resembles an upturned rhombus with two of it’s corners removed.

AMD and ARM on the Rise

While Intel still appears to be the leading CPU manufacturer at this year’s Computex, our team saw a clearly increased presence of both ARM and AMD products among the established board manufacturers. For their part, Sapphire presented their new Q7N-FT3GS-AA, IPC-FS1r2A75-I, and TM-FT3GS/FT3Gb boards which all feature onboard ARM processors. Along with the upcoming Internet of Things innovations that we touched on in yesterday’s blog, there’s a lot to get excited about for the future of embedded and industrial computing.