We’ve come a long way since the late 1940’s when music industry pioneers first developed touch-sensitive synthesizers, paving the way for later advancements in the 1960s and 70s to pair touch technology with a graphical display to create the first touch screen computer. Today, we have much more complex systems available, such as resistive and capacitive touch screen computers. It’s fair to say that these early touch screen inventors likely never envisioned the seemingly endless applications for their devices that exist today.

Both Resistive and Capacitive Touch Screen panel PCs are very popular among industrial PC users, which is why many of the models in our Panel PC Line are available in both capacitive and resistive versions. The continued growth of touch screen use means we hear the question “Which type of touch screen should I choose?” all the time. There are distinct advantages to each type of touch screen, so let’s take a quick look at how they work and where each excels.

How Does a Capacitive Touch Screen Computer Work? Capacitive touch screen panels consist of an insulator, such as glass, coated with a transparent conductor. Since the human body is also an electrical conductor, touching the surface of the screen results in a distortion of the screen’s electrostatic field, measurable as a change in capacitance. The location of this disruption is identified and sent to the touchscreen controller for processing.

How Does a Resistive Touch Screen Computer Work? 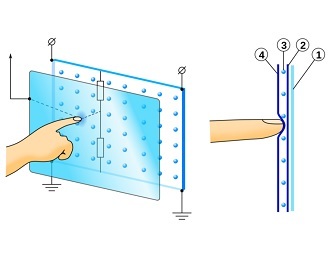 Resistive touch screen computer panels consist of two transparent sheets with a small gap between them. Each sheet is coated with a transparent conducting material and a uniform electrical resistance value is applied to the surface of each sheet. As the top sheet gets pressed and contacts the sheet behind it, electricity is conducted and the location of the conduction point is detected and sent to the touchscreen controller for processing.

The physical pressure required to operate resistive touch screens means they can be used while wearing gloves, a major advantage for food production, factory automation, and healthcare applications where these type of touchscreens are most common.

Resistive and Capacitive touch screen panel PCs process information using different technology, but the convenience they offer in Human Machine Interface (HMI) applications has made them one of the largest growth areas for industrial PCs. The choice between these two distinct touch panels will depend on your specific application, but if you have questions about which type of touchscreen is right for your project our Solution Specialists can help you make the right choice. To check out our full line of panel PCs, click here.